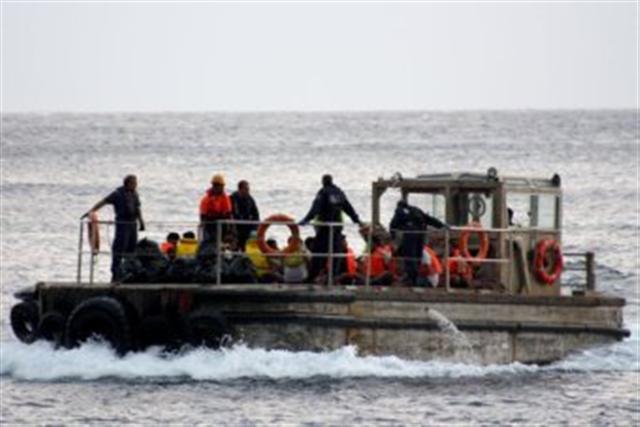 A UN watchdog has called on Australia to release 46 refugees being held in indefinite detention, labelling it cruel and arbitrary.

The UN Human Rights Committee has slammed Australia's treatment of the group, saying the country broke global human rights rules by denying the group a chance to challenge their detention.

In a review of complaints from the refugees - 42 Sri Lankan Tamils, three Rohingya Muslims from Myanmar and a Kuwaiti - the committee said the detention was arbitrary and broke the International Covenant on Civil and Political Rights.

"Australia's indefinite detention of 46 recognised refugees on security grounds amounted to cruel, inhuman and degrading treatment, inflicting serious psychological harm on them, " the committee said in a statement.

The plaintiffs arrived at Australia's remote Christmas Island between March 2009 and December 2010.

Despite being recognised as refugees, who could not be sent home, they were kept in immigration detention centres on Christmas Island and mainland Australia because the Australia's intelligence organisation ASIO deemed them a security risk.

They filed their UN complaints in 2011 and 2012 and seven have since been released.

The committee, comprising 18 human rights experts, said Australia is obliged release the people and should offer them compensation and rehabilitation.

"The committee reached its conclusion based principally on the fact that the refugees were not told the reasons for the negative security assessment and so were unable to mount a legal challenge to their indefinite detention, " the UN body said.

While Australia told the committee that releasing classified details would compromise the assessment system and national security, it nonetheless explained that they posed one or more of three specific risks.

The risks included the threat of fomenting violence in Australia, providing a save haven for organisations to prepare attacks against their homeland's government and raising funds in Australia for foreign terrorists.


Australia not bound by committee's finding

Ben Saul, a professor of international law at the University of Sydney, worked on the cases and says the findings are not legally binding in the same way as a court decision as in Australia.

"All in all, the committee has found that Australia has committed almost 150 violations of its international treaty obligation, " he said.

"So these are commitments which Australia has voluntarily consented to by signing the international human rights treaties, this is the largest case of its kind ever decided against Australia in a procedural which Australia itself has agreed to."

Despite the findings, Professor Saul says it does remain open to the Government to thumb its nose at the committee.

"As an independent body of renowned legal experts, its decisions about the interpretation of Australia's human right obligations are widely regarded as authoritative and highly persuasive, " Professor Saul said.

"Of course Australia is bound by the underlying treaty obligations which the, the breaches of which the committee has identified.

"So for that reason the committee has called on Australia to implement in good faith the treaty commitments which Australia itself has agreed to."

Professor Saul said between 40 and 60 people were still being held under these circumstances, in indefinite detention and most of them have been there for about four years.

"Most of them have been there for about four years and counting, which is a pretty dramatic period of time, " he said.

"And most of them are going nowhere, the High Court in Australia won't agree to release them, no other country will take them, precisely because Australia says they're a security risk of some kind.

"So they're stuck in this limbo where they don't know the case against them."