Australia ranked among world`s best countries to be an immigrant 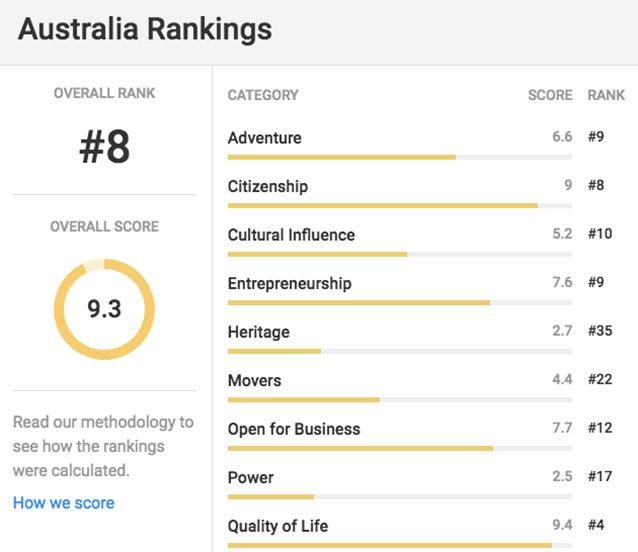 Australia ranked among world's best countries to be an immigrant
Yahoo7 News on July 12, 2017, 12:35 pm.
Australia is ranked in the top four countries to be an immigrant, according to a new global study.
The nation polled highly in measures such as economic stability, income equality and job markets, which were used to create the list complied by ranking company US News and World Report.
Sweden, a strong social welfare state that has long been considered a haven for migrants, took the top spot, followed by Canada, Switzerland, then Australia.
Germany rounded out the top five.
The US fell in the rankings due to its perceived economic inequality, according to the data publisher.
More than 21, 000 people worldwide participated in the Best Countries survey, in which they assessed how closely they associated 80 countries with specific characteristics.
Four of these – "economically stable, " "good job market, " "income equality" and "is a place I would live" – were included in the ranking.
Data on migrant populations from the World Bank and the United Nations was also used to determine the outcome of the rankings.
"While our methodology did not focus on refugees specifically, it did take into account immigration policies and integration measures per analysis from the United Nations, " Deidre McPhillips, a data reporter who helped design the rankings, told the Washington Post.
"Our aim with this package was to focus on the economic aspects of immigration and the impacts this could have on a country's perceived standing in the world."
European and North American nations ranked highest, however Serbia came in far lower at 68, while the Czech Republic ranked 50.
Kenya ranked lowest, closely preceded by Guatemala and Tunisia.
Australia ranked eighth overall in the US News Best Countries poll, which also considers quality of life, entrepreneurship, cultural influence and adventure.
View original https://au.news.yahoo.com/a/36351493/australia-ranked-among-worlds-best-countries-to-be-an-immigrant/#page1