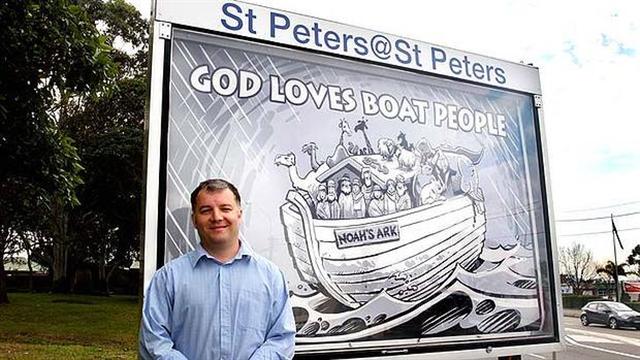 One Sydney church has helped to rehouse more than 90 asylum seekers dumped in an inner-city hotel the day after leaving Curtin Immigration Detention Centre.
They arrived with the singlets on their backs and $85 to last them two weeks in a cramped room with no cooking facilities.
Reverend Andrew Bruce, the minister of St Peters Anglican Church, says Australia's asylum seeker policy is ''heartless, unacceptable . . . a complete shambles''.
He was halfway through a sermon on Good Friday when 45 asylum seekers from Sri Lanka filed into the back of his church.
The group of Tamil-speaking men had walked across the Princes Highway to the church, desperate for help.
''They had been left in the hotel with no idea where the shops were and none or very little English, '' Mr Bruce said. ''They only had the shirt, the shoes, shorts and thongs on that they were wearing, '' he said.
Mr Bruce and people who were inside the church at the time took the group straight to the shops, bought rice cookers and started finding clothes for them.
They came to the church every day for six weeks to cook, learn English and play cricket next to a graveyard.
Mr Bruce said the Red Cross was getting four times the number of people it was originally contracted for and could not cope.
Not long after the group had left, Mr Bruce was walking to the train station when he saw another group of about 40 people just standing outside the hotel across the road.
They were 38 people from Myanmar, an Iranian couple, an Iraqi and a Sri Lankan man.
A few days later the group from Myanmar knocked on the church's door on a rainy day in June. They were dripping wet.
''They turned up, these guys, literally shivering, and saying we need help.''
People from the congregation started taking off their jumpers and walking to their cars to find them clothes.
''These guys are expected to find accommodation when they arrive on their own, have no other family, no language, and they are expected to find a house in Sydney with no money, no credit history. It's a pretty stressful time for these guys.
''Government policies on both sides are just heartless.''
A number of churches are weighing into political debate as the election draws closer. The Anglican Parish of Gosford recently displayed a sign reading: ''Kevin, PNG is not the answer, Love God''.
The church's minister, Father Rod Bower, is hoping his humorous and controversial signage will draw attention to the asylum seeker issue.
''We need to be showing hospitality - especially to people who are not only homeless but nationless, '' Mr Bower said.
Jesus, maybe this is a sign
You don't have to be on Twitter to follow Jesus and smoking won't kill you in the next life.
Churches are displaying more provocative and comical messages outside God's door to spread the word of Christianity.
Outreach Media produces quirky Christian posters for people who do not often attend church.
St Peters Anglican Church is one of the 100 churches across Australia making use of its heavily trafficked location.
Reverend Andrew Bruce said 50, 000 people drive past his church each day. ''I wanted to communicate that we are here, we are open and we care about what's going on in the world.''
His church has put up signs including: ''Drive Safely: There's only one death we want to talk about this Easter'' and ''Shhhhhh don't mention Jesus''.
The Anglican parish of Gosford gets regular headlines and air-time for several outspoken messages. This week, Father Rod Bower put up a message that read: 'Rupert, News is very very Limited.''Another signs was ''Tony you've forgotten same sex appeal''.
''I would encourage Christian churches, mosques, and synagogues to put up signs that are designed to soften the hearts of people, '' Mr Bower said.
Border Chronicle
By Emma Partridge
Sept. 2, 2013