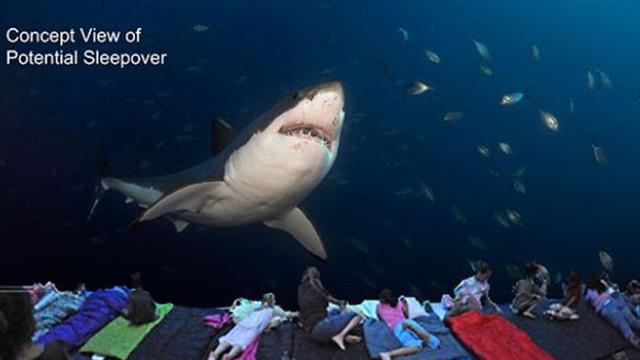 In Port Lincoln you can swim with tuna, snorkel with sea-lions - and soon you might be able to sleep with great white sharks.

Port Lincoln Council has voted to support a world-first plan by entrepreneur Travis Nottle for a giant $40 million floating aquarium to hold the giant killers for months at a time.

An undersea viewing area would give visitors a fish-eye's view of the giant predators, complete with facilities for a sleepover as sharks cruise by.

The massive fish bowl would be located in the sea, possibly at the southern end of Boston Island, using reinforced nets to keep the sharks from swimming away.

Mr Nottle, who moved back to Port Lincoln this year after spending 10 years working overseas, is now in California on a fact-finding mission speaking to officials at the Monterey Bay Aquarium, which has kept great whites for up to six months at a time in a four-megalitre aquarium.

His plan is for two pens 25 times larger than Monterey's aquarium, located in the sharks' natural habitat. Passing sharks would be lured in with bait, including live prey, and fed their natural diet while on show.

The proposed Great White Shark Discovery Centre would have a heavy emphasis on research, according to the concept plan presented to the council.

The 100-megalitre enclosures with diameters of 90m would keep sharks for up to three months, which it is claimed can be done without affecting migratory sharks' health and allow them room to attack swimming prey at full speed.

"Monterey Bay was transformed into a major attraction when it opened in 1984, " he said.

"They could then afford to have research arms open. They have over one million visitors a year from all over the world and I estimate Port Lincoln could receive 85, 000 to 100, 000 visitors a year.

"We are armed with a dream, a plan and individuals ready to make it a reality. The missing ingredient is money."

"Council sees this as a fantastic concept with the potential to really drive research and tourism visitation to Port Lincoln, " he said.

The State Government is a little less enthusiastic - Fisheries Minister Gail Gago said great white sharks are protected under state and commonwealth law and classified as vulnerable under international and national environment law.

"I am also advised that the capture and retention of such a large migratory species can adversely affect the animal's health, " Ms Gago said.

"I have advised Mr Nottle his project must be able to address all regulatory, animal welfare and safety issues."

Last year, the Lukin Corporation unveiled plans for an 18-hole golf course at Port Lincoln in the shape of a great white shark .